Owning an E-bike is an excellent way to reduce carbon emissions and preserve the earth’s atmosphere. More so, an E-bike will help commuters get from one point to the other due to their ability to navigate traffic easily.

Charging an electric bike with a solar panel can be a challenging task for new E-bike owners. Well, that is also why you need to get adequate information before you get started with a solar panel, only to put the effort in vain.

The idea of powering an E-bike with solar is relatively new, but it is possible with the right supply. You can use an E-bike solar charger to recharge an electric bike. However, not all solar adapters are equal in capacity, nor every panel will be compatible either.

Let’s see how you can charge an electric bike with solar charger, especially when you’re out, camping, hunting, or running on solar in general!

Can You Charge An Electric Bike With Solar Panel?

Alright, first thing is, it is possible to charge an electric bike using a solar panel. E-bikes usually come with four voltages. They are; 48V, 36V, 26V, and 72V. The more volts the bike has, the more power it will have, and the more power it will require for charging. If the voltage exceeds the 750watt output, the E-bike is classified as a class-3 ebike, sometimes, a scooter. 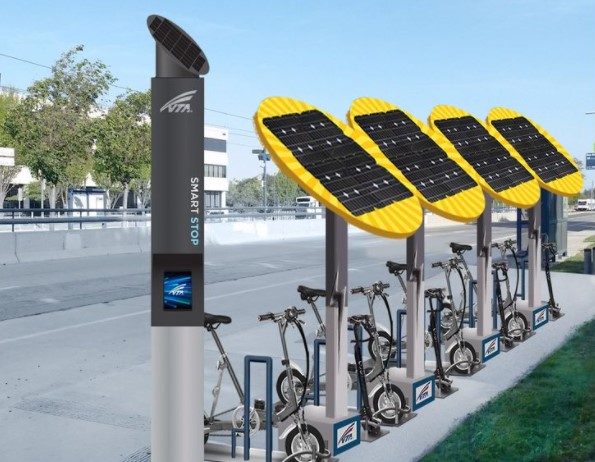 E-bike models typically have a 36V battery. Some models may have 24V, and even fewer have 48V. However, some models might have the 72V. They are rare and not generally classified as standard bicycles.

Manufacturers of these bikes specify the 36V, 48V, and 24V because of their cost to power ratio. A higher volt will be significantly more expensive than a lower volt which is why manufacturers make the lower volts to produce cost-effective E-Bikes.

Electrical Hazards is also a factor to consider for people looking for how to charge electric bikes with solar panel. The human flesh can shield the body from electrical simulations of 40V-45V. Higher voltages like 75V are potentially dangerous and can cause electrical shocks.

How To Charge Electric Bike With Solar Panel?

Charging an Electric Bike With a Solar Panel is an intelligent way to save electricity costs and reduce digital footprints. E-bikes are now used even in mainstream industries. A good example is the use of food delivery electric bikes by companies to deliver food and other services. Owners of E-bikes don’t need to worry when traveling as their bikes can be charged even without a house socket.

However, there are a few things one must know before charging their bikes with solar. One wrong move can result in the frying of the E-bikes panels. The following paragraph will show a detailed step-by-step guide on how to charge an electric bike with solar panel.

Step 1: E-bike owners can connect the inverter and charge controller. You can do this via a battery connector. One way to ensure safety is installing a fuse on the positive leads. It will reduce the risk of getting electrocuted.

Step 3: Place the panel in the sun and check the increase in power voltage. To check the rise in the power voltage, you can easily use a power regulator.

If there is an increase in the power voltage, the solar panel effectively charges the batteries. The next step is to connect the charger to the Inverter outlet. Doing this will determine whether the E-bike is receiving power.

How Long Does It Take To Solar Charge An E-Bike?

E-bike owners can use the main charger with the bike and feed it with solar. It helps the bike to charge simultaneously with a standard direct charge. A 12-volt panel or battery will need a considerable amount of time to charge. For example, a 48-volt E-bike needs 54.4 volts at two amps.

Safety Tips While Charging An Electric Bike With Solar Panel

Electric bikes can be exciting for a fun ride and short-distance travel. However, charging one can be hazardous if proper safety tips are not followed. 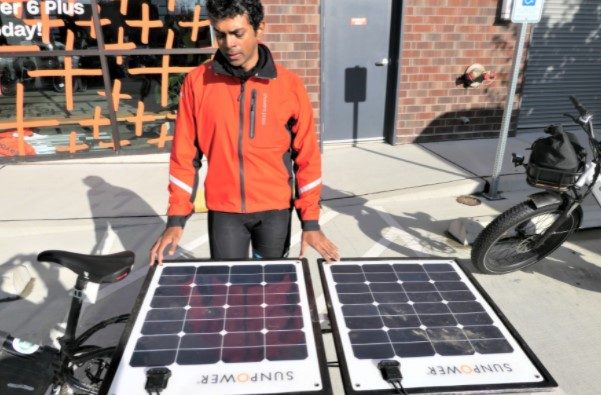 The most important safety tips for charging an electric bike using solar are discussed below. Have a look:

An electric bike is the best thing you can own if you love cost-effective transportation with a higher speed than usual bikes. Knowing how to charge electric bikes with the solar panel will save you a huge fortune as well as reduce the headache of not charging your E-bikes on the go.

If you’re going on a long tour and worried about charging the battery, the best thing you can do is have a solar charging setup with you apart from having an extra battery.