Electric bikes are highly accepted and recognized by the cycling industry. But the state and county laws are not clear on where to exactly ride the e-bikes. The confusion makes pedestrians find it challenging to walk on the sidewalks.

Most states and counties classify e-bikes as motor vehicles and make riding on the sidewalks illegal. I recommend getting conversant with the states, counties, and cities’ regulations before riding your electric bike on the sidewalk.

I wrote this article to share safety tips to keep in mind while riding an e-bike on the sidewalk. Besides that, I have also shared factors that influence whether you can ride an electric bike on the sidewalk in the United States.

Can You Ride an E-bike on The Sidewalk?

The federal government defines electric bikes as regular bicycles. I recommend following the standard bicycle laws to feel more comfortable when riding the e-bike on the sidewalk. Though there are so many rules and regulations, these days people in the USA use e-bikes for delivery purposes, food delivery on ebike is one of the best services among them.

Below are the factors that influence whether you can ride an e-bike on the sidewalk in the United States of America:

Some local authorities allow cyclists to ride their electric bikes on the sidewalk if the adjacent road speed limit is above 20mph.

The cyclists will be required to divert back to the main carriageway when the speed limit decreases or drops below 20mph.

Local authorities require cyclists to ride their e-bikes in the same direction as the traffic in the adjacent lane. Otherwise, it will be illegal to ride in the opposite direction of the traffic flow.

Give Way and Warning Rules

Some sidewalks can be shared between cyclists and pedestrians. But the cyclists must give way to pedestrians to avoid breaking the local authorities’ regulations.

Always use a horn bell when approaching a pedestrian to avoid a collision. I recommend reading the rules in your locality to stay safe and avoid tickets or fines.

Some localities have areas with sidewalk designations as shared pathways. These locations allow cyclists to legally ride their electric bikes.

Most states and counties allow children to ride their bicycles on the sidewalks. It is a safer option than riding near vehicle traffic or bike lanes designation.

Canada and the United Kingdom prohibit cyclists from riding electric bikes on the sidewalks (pavements). Be conversant with the laws governing your country before hitting the sidewalks.

Many cities have bike-lane designations for riding regular or electric bikes. The law stipulates that every cyclist to the lane for safety and easy pedestrian progression.

Riding an electric bike on the sidewalk can be a daunting experience if many pedestrians are using it. Most pedestrians tend to walk casually and may even swerve. These casual movements increase the risk of an accident. 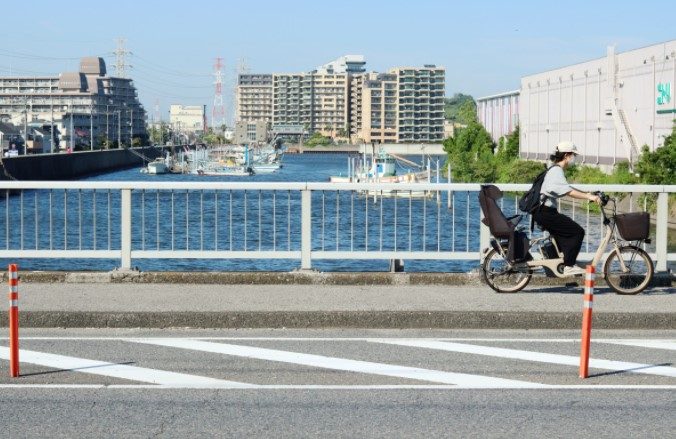 Below are quick safety tips to keep in mind while riding an electric bike on the sidewalk to avoid causing accidents and getting fines:

I recommend being conversant with each state, county, and city regulation before riding your electric bike on the sidewalks. It will help avoid breaking the law and getting fines.